To European governments, parliaments and EU institutions and Barbara Pompili, Minister for the Ecological Transition of France

Pull out of the Energy Charter Treaty and stop its expansion to other countries! The treaty allows coal, oil and gas corporations to obstruct the transition to a clean energy system. Disarm fossil fuel firms now, so they can no longer impede urgent climate action!

The time to avoid a climate catastrophe is quickly running out. [2] But fossil fuel companies are holding our governments hostage through the threat of being sued for extortionate fines. They are blocking our governments from making the decisions we need to save our climate. A toxic fossil fuel treaty from the past has put us in this absurd situation. [3]

Next week our energy ministers will come together and could give a decisive signal to end this toxic fossil fuel treaty. Germany and Poland are considering an end to the treaty, while other countries like Belgium, the Netherlands, Spain and France are still on the fence.

Let’s champion the call of ministers who want to end the treaty and fuel the revolt by putting pressure on the energy ministers who are still undecided. If everyone who added their voice to this demand sends a personal message to their energy minister, we can convince them to take our side.

This toxic fossil fuel treaty - officially called the Energy Charter Treaty -  is a blast from the past, from a period when governments were in climate denial. [4] Yet, fossil fuel companies are clinging to it for dear life because it means they can protect their profits.

But protecting profits means suing governments who dare put people and planet first. When they win, governments have to pay compensation with our public money. Public money that could go to green investments, education and hospitals instead of continuing to line the pockets of the biggest polluters.

But we are gaining ground from the big polluters. Italy has already ended its membership of this toxic treaty, European Parliamentarians support our call and now it is up to our countries to choose a side. But for this to happen, our energy ministers need to hear our personal messages on why we care.

Return to petition
By clicking “Sign” you are supporting this campaign, and agreeing to WeMove Europe using your information for the purpose of this campaign. We might hand over your name, surname and country to the petition target. Unless you subscribe to receive personalised updates, we will delete your data after the campaign has ended. We will never share your data with any third parties without your permission. See our full privacy policy here.
1,029,005
of 1,200,000 signatures

At this time of climate crisis we should be spending this money on alternative energy. Not adding to the already enormous profits that energy companies are making.
Janet
The environmental and its health is crucial.
Emma
We must protect our planet while we can
Eileen
Fossil fuel companies hid evidence of climate change from the public and now they are preventing public representatives from taking climate action, all for profit. We refuse to be held hostage by destructive private interests!
Emily
transition to clean energy!
isabel
Thanks for signing! Your signature has been added.
Tweet to Barbara Pompili, Minister for the Ecological Transition of France

Companies drilling for oil or burning coal use the toxic treaty to sue governments that stop them. It is a threat to our governments trying to transition to clean energy and could cost Europeans over 7 billion euros.

Right now is our crucial chance to end this treaty which gives full power to fossil fuel industries, before we are locked into it for years to come. It is the EU Commissioners in charge who need to hear our voices.

To drown out the fossil fuel companies’ pressure we have gathered this morning, en masse right outside the Commissioners office. Even though you are not physically here with us, help make sure they cannot ignore our message.

Thank you for joining the revolt against the fossil fuel industry suing our governments for protecting our planet.

But to get the whole of Europe out of this dangerous treaty, we will need you every step of the way.

Our campaigns are people powered and people funded. We receive no money from corporations and governments. 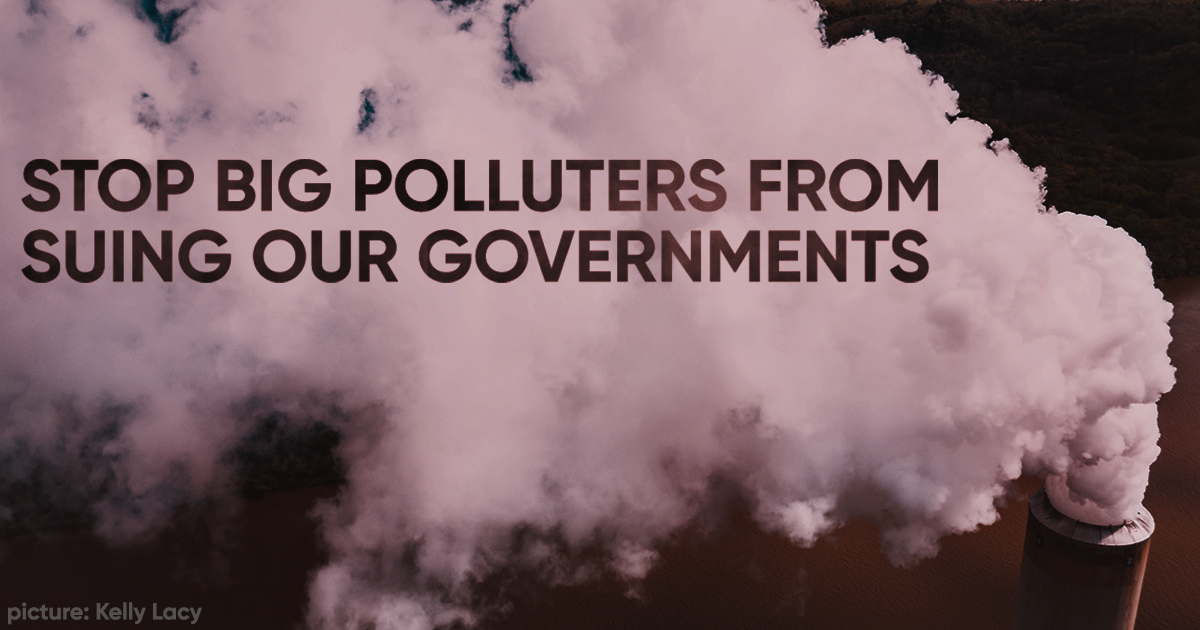 Under a little-known treaty, big polluters are suing our governments for taking climate action and are winning billions in compensation. Join to stop this dangerous treaty and share!

Thank you for joining the revolt against the power of the fossil fuel industries. The more of us join, the stronger our call becomes! Help spread the word by sharing this campaign,and forward the original email from WeMove Europe!

Fossil fuels industries are suing us
Hi, Fossil fuel companies are suing our governments for their climate action and are winning billions in compensation. They do it thanks to a little known but dangerous treaty, but we can leave it. I’ve just signed a petition to back their call and push the other EU countries to pull out of this treaty! Join me! https://act.wemove.eu/campaigns/stop-big-pollutors After years of mobilisation, lawsuits against their government, thousands of people in the streets: our friends in the Netherlands have won. Their government heard their voices and decided to phase out coal. It is a message of hope for all of us who aspire to live in a world where we protect what is most precious: our planet. But a German fossil fuel giant and coal plant owner is using a little known treaty to sue the Netherlands and claim about €1.4 billion in compensation. And no EU country is safe from such an attack. This treaty - The Energy Charter Treaty - allows fossil fuel giants to sue any of our governments for changing their energy policies even if it means that our planet and future generations will suffer. We need other EU countries to join the revolt. To do this we have partnered with dozens of organisations across Europe and journalists who will reveal shocking stories to build the media pressure. Join this people power wave to stop this treaty! https://act.wemove.eu/campaigns/stop-big-pollutors Thank you!

Under a little-known treaty, big polluters are suing our governments for taking climate action and are winning billions in compensation. Join to stop this dangerous treaty and share!

Thank you for joining the revolt against the inordinate power of the fossil fuel industries. The more we sign this appeal, the stronger we will be against them!