Support a glyphosate-free future, by publicly opposing renewed authorisation of this toxic pesticide in the European Union, and with a plan to to support farmers.

We ask you to make this public commitment immediately, as an essential component of the broader objective of an accelerated exit from synthetic pesticides and the transition of our agriculture and food system.

Together, we fought to ban glyphosate in Europe. But EU discussions for it to stay on the market are underway. And Bayer-Monsanto lobbyists are bombarding European leaders with biased studies to make their case. [3]

We have a big opportunity to stop this. The French president Emmanuel Macron has already said, when he takes on the highly influential EU presidency in a few weeks, he will push for “an accelerated phase-out of pesticides". [4] [5] And, above all, with the French presidential elections around the corner, Macron will be under pressure to deliver on his promises.

But unless we keep the pressure up, it could be all talk. With Macron’s political future on the line, he will want to protect his reputation as a European leader who follows through with his commitments, both in France and throughout Europe. And a massive petition beyond the French borders to show him that all of us are watching could make sure he does just that.

Return to petition
By clicking “Sign” you are supporting this campaign, and agreeing to WeMove Europe using your information for the purpose of this campaign. We might hand over your name, surname and country to the petition target. Unless you subscribe to receive personalised updates, we will delete your data after the campaign has ended. We will never share your data with any third parties without your permission. See our full privacy policy here.
973,808
of 1,100,000 signatures

Maurice
IMPORTANT - It's necessary to ban Glyphosate, but before that it's imperative to find a BIOLOGICAL substitute, by the end of 2023, if it does not already exist, to help the Trades of the Earth.
Alfred
Gift in der Landwirtschaft ist ein Anachronismus, der längst beendet gehört.
Elke
Non Glyphosate, für Deine Urenkel
Sabrina
Pour notre santé
Matthias
We need to stop the killing of insects. We need to bring back bio diversity.
Thanks for signing! Your signature has been added.
Tweet to Emmanuel Macron, President of the French Republic

Today at 4pm, Macron has the chance to get the EU to finally ban glyphosate.

All he needs to do is say that the ban will be a priority when France takes over the EU presidency at the start of the new year.

If we bombard him with tweets to support our demand, he cannot ignore us.

Thank you for your call to Emmanuel Macron to ban glyphosate in Europe!

WeMove Europe is an independent European organization fighting every day for a better Europe.

We depend entirely on donations of members like you, and receive no money from governments or companies.

Your donation, no matter how small, will allow us to implement all possible actions to convince President Emmanuel Macron to support a ban on glyphosate in Europe. 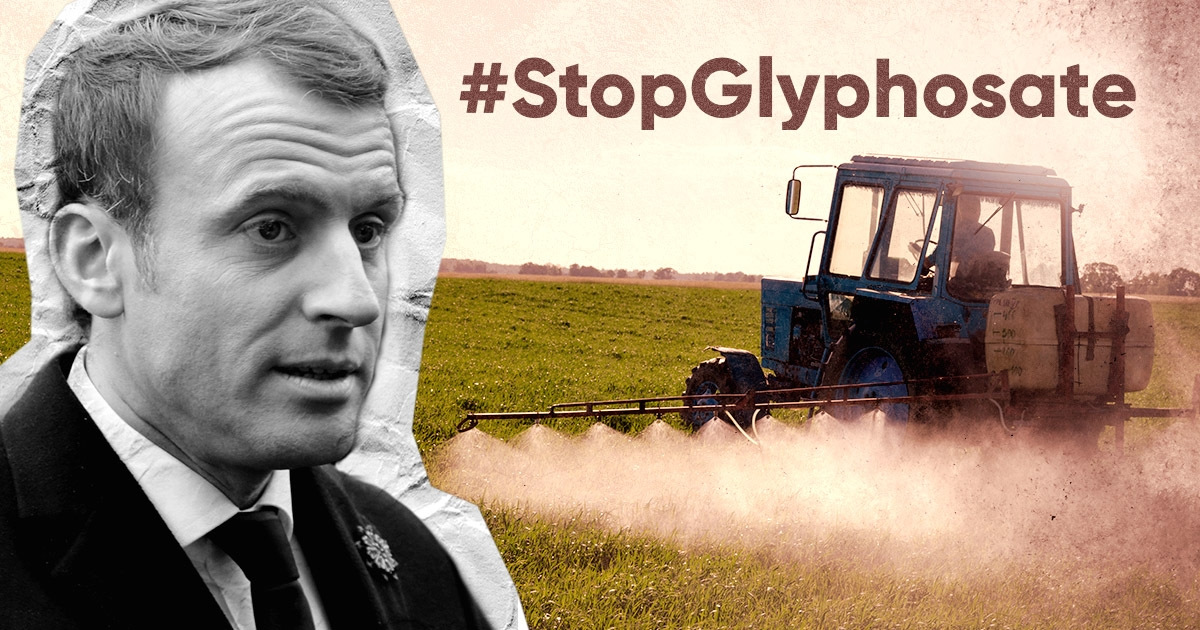 Share this call with all your friends and family on social media and by email. Only together can we achieve this victory.

Macron: ban glyphosate in Europe!
Hi, I have just signed a petition calling on President Emmanuel Macron to support a ban on glyphosate in Europe. Sign the petition: https://act.wemove.eu/campaigns/stop-glyphosate-france Europe is about to renew the use of glyphosate, based on studies funded by Bayer-Monsanto. Yet, banning this substance is essential. Used as a pesticide, it is recognized as a probable human carcinogen by the International Agency for Research on Cancer (IARC) at the World Health Organization (WHO). Discussions for the renewal of its authorization after 2022 are underway. Let's call on the French president - who had declared he wanted to "carry an initiative for an accelerated exit from pesticides" - to respect his word. Sign the petition: https://act.wemove.eu/campaigns/stop-glyphosate-france Thank you!