On Saturday 7 November 2020, European leaders including Ursula von Der Leyen, President of the European Commission, Charles Michel, President of the European Council, and EU heads of state congratulated Joe Biden and Kamala Harris on their victory in the U.S. Presidential election. This followed days of counting of in-person and mail-in ballots across the country. The only EU head of state to congratulate Donald Trump before the election result was called was the far-right Prime Minister of Slovenia, Janez Janša. www.wemove.eu
59,119 of 75,000 signatures

We, the undersigned people of Europe, call upon EU leaders and heads of state to refuse to recognise any victor of the US Presidential Election until all votes have been counted.

The result is contested, and votes are still being counted in the election that will decide the next American President. There's so much at stake.

From addressing climate change to peace and stability in the world to the fight for racial justice, the United States has a key role to play in the global community. And the next four years will be vital on all these fronts. If American democracy is threatened now, global progress on all of these issues that we've spent years fighting for could be rolled back.

Anti-democratic forces in the EU are already making moves. Hungarian Prime Minister Viktor Orbán and Slovenian Prime Minister Janez Janša both endorsed Trump well before the election, signaling their willingness to interfere. [1] What we really need now is for our leaders to help stop this crisis - by refusing to recognise any winner until all the votes are counted.

If Europeans stand up now, we can get our leaders to publicly state that they won’t recognise any candidate until all the votes are counted. By standing up now, we also show far-right politicians here at home that we Europe and Europeans will stand up for democracy, wherever it’s threatened.

People around the world are rising up to stand in solidarity with American voters. Together, we can be part of a global movement to remind all leaders, wherever they are, that people’s votes and voices are their power.

Return to petition
By clicking “Sign” you are supporting this campaign, and agreeing to WeMove Europe using your information for the purpose of this campaign. We might hand over your name, surname and country to the petition target. Unless you subscribe to receive personalised updates, we will delete your data after the campaign has ended. We will never share your data with any third parties without your permission. See our full privacy policy here.
59,119
of 75,000 signatures

votes and democracy go together. Keep decisions fair.
elizabeth
¡Emergency!
Mónica
A real democracy needs, transparent processes and elections
Diogo
Democracy!
Ewa
I live in a country that is not democratic.
Outi
Thanks for signing! Your signature has been added.

Can you donate just a few euros a month to help our community continue to stand up for democracy? 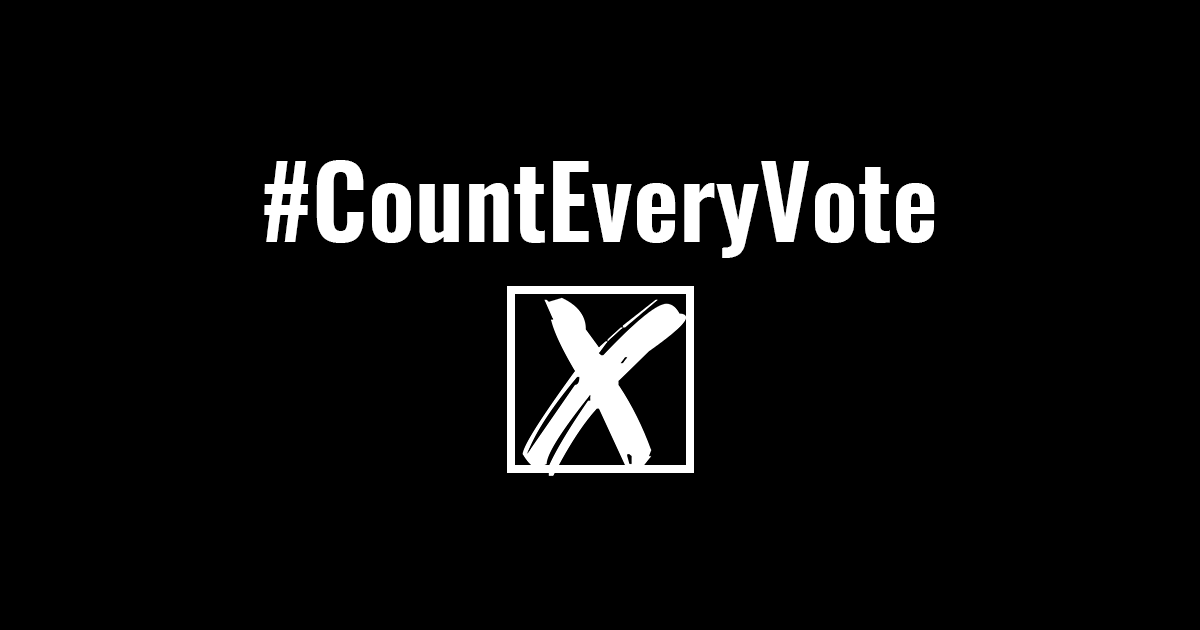 Honour Every Vote
Hi, I just signed a petition to make sure every vote in the US election counts! https://act.wemove.eu/campaigns/us-election-2020 The election result is still not known, and it’s already being contested. What we really need now is for our leaders to help stop this crisis - by refusing to recognise any winner until all the votes are counted. Many leaders will only take a public stand if they know their voters are behind them – that’s why we need to act quickly, and with a massive show of force. Will you sign the global petition calling on our leaders not to recognise a winner of the US election until all the votes are counted? https://act.wemove.eu/campaigns/us-election-2020 Thank you!