The people of Belarus have the right to decide on their future and freely elect their leader. Following the disputed elections on August 9, 2020 and the violent crackdown of peaceful protesters by President Aleksandr Lukashenko in cities across Belarus, we demand that the European Union and its Member States:

Alexandr Lukashenko, “Europe’s Last Dictator”, has been ruling Belarus with an iron grip for 26 years, suppressing democracy and smashing any dissent. But it’s possible his hold on power may finally come to an end.

On August 9, Lukashenko proclaimed another landslide electoral victory despite clear signs that the election was rigged. But this time it was too much for the people of Belarus!

Thousands of people marched on the streets of Minsk and other cities to challenge the result. These brave defenders of democracy were met by riot police, and dozens of protesters were beaten and injured over the past two weeks. More than 6,000 people have been arrested. [1]

What happened this summer in Belarus cannot be called elections: main opponents are either imprisoned, or barred from registration. [2] Lukashenko's opponent in the elections, Svetlana Tsikhanouskaya, was forced to leave the country and is now in exile in the EU, in Lithuania. [3] Tsikhanouskaya’s campaign was run on the promise to establish fair and free elections within 6 months. [4]

What matters now is the EU’s response. The EU has already signalled that it will issue sanctions against President Lukashenko and the ruling elite, but this is not enough. [5] The EU can stand up to Lukashenko by refusing to recognise him as the President and support free and fair elections as soon as possible.

The EU needs to provide all the necessary support to guarantee new elections, including by recognising the opposition leader, Svetlana Tikhanovskaya, as a necessary counterpart in any diplomatic or international talks over the future of Belarus and its people.

Together, let’s tell EU leaders to stand with the people of Belarus and call for free and fair elections in Belarus.

Return to petition
By clicking “Sign” you are supporting this campaign, and agreeing to WeMove Europe using your information for the purpose of this campaign. We might hand over your name, surname and country to the petition target. Unless you subscribe to receive personalised updates, we will delete your data after the campaign has ended. We will never share your data with any third parties without your permission. See our full privacy policy here.
91,751
of 125,000 signatures

Ciska
Free the People of Belarus
Katya
I come from Belarus and want to see it free and the people no longer oppressed
Lizaveta
Because Lukashenko is illegally appointed as President.
Piotr
Because Free Belarus means free and safe Europe.
Benjamin
Because it is not right that so many people are being killed, arrested and otherwise oppressed because one man is so power hungry that he finds himself above the wellbeing and freedom of other people.
Thanks for signing! Your signature has been added.

Today, we stand up for people in Belarus. Every day, WeMove is there to support democracy, activism and political freedom in Europe.

We don’t accept money from governments or corporations. Will you chip in a couple of euros to help us continue our work for democracy in Belarus? 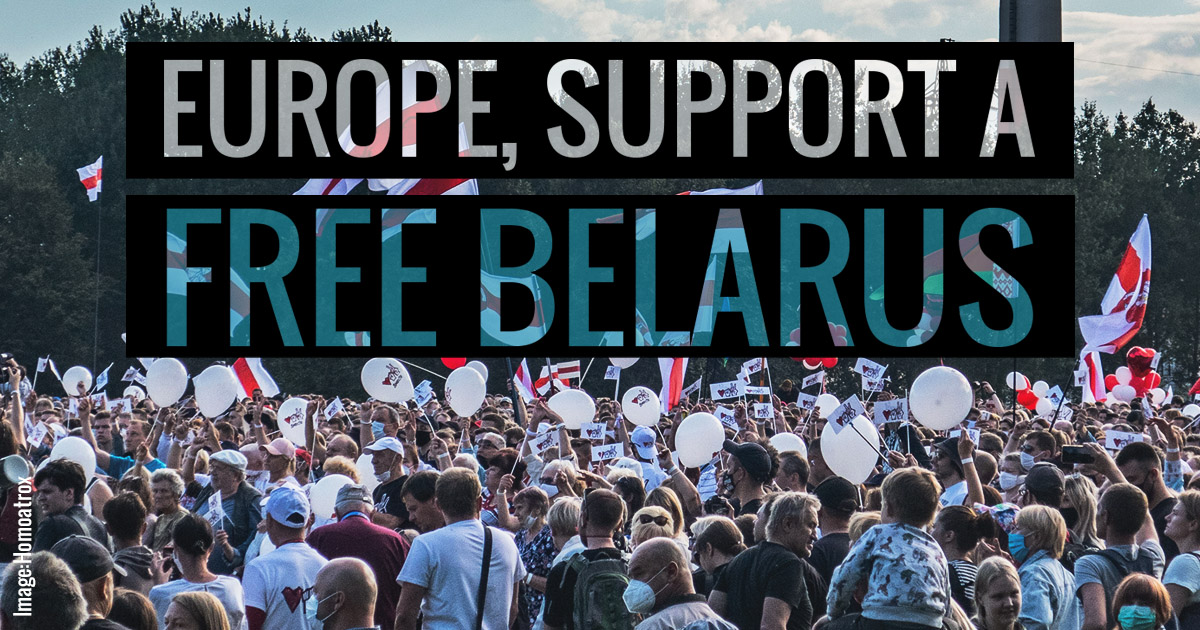 SIGN NOW! EU leaders will meet this Wednesday 12h00 to discuss the situation in #Belarus. The people of Belarus have the right to decide on their future and freely elect their leader. @EUCouncil @eucopresident should refuse to recognize Lukashenko as President of #Belarus and call on new elections! #BelarusProtest

Thank you for signing the petition! The EU leaders must know that people from all corners of Europe stand with the people of Belarus and demand free elections!

The more signatures we get, the more our voice will count. Will you share the petition with your friends and family?

Subject line
Hi, Have you seen what’s going on in Belarus? Hundreds of thousands of people on the streets protest against rigged elections. It looks like the days of “Europe’s Last Dictator”, Alexandr Lukashenko, are counted. But only if people of Belarus are not left on their own! And Belarus borders on the EU, so EU’s role is key!. I have just signed a petition to the EU leaders to act now. They must not recognize Lukashenko a President and free elections are needed in Belarus asap. Will you join me and sign the petition too? https://act.wemove.eu/campaigns/belarus

SIGN NOW! EU leaders will meet this Wednesday 12h00 to discuss the situation in #Belarus. The people of Belarus have the right to decide on their future and freely elect their leader. @EUCouncil @eucopresident should refuse to recognize Lukashenko as President of #Belarus and call on new elections! #BelarusProtest

Thank you for taking action against dictatorship in Belarus!