Our investigation published in the Guardian reveals that Nutella, Kinder Bueno and Ferrero-Rocher contain hazelnuts that may have been picked by children, exploited in Turkey’s hazelnut industry. We urge to you to support a fair price for hazelnuts in Turkey, ensure adult workers get a living wage income and stop child labour immediately!

Our investigation published in the Guardian reveals that Ferrero's products contain hazelnuts that may have been picked by children in Turkey. [1] The list is long: Nutella, Kinder Bueno, or Ferrero-Rocher chocolate you or your children buy this Christmas could be made with hazelnuts picked by children.

This summer our partners, The Center for Child Rights in Turkey captured video evidence that shows children as young as 11 working on hazelnut farms across Turkey. [2] Children work long hours for low pay in often hazardous conditions and many are forced to drop out of school. Because wages are so low, it’s common for hazelnut workers to bring their children to work with them on the farm. Otherwise, they would not be able to afford shelter or other expenses they need to travel to the farms. [3]

The Italian confectionery company, Ferrero, one of the largest chocolate producers in the world and maker of Nutella and Ferrero Rocher, is the biggest buyer of hazelnuts in Turkey, origin of 70% of the world's hazelnuts.[4] We were able to show that Ferrero’s products likely contain hazelnuts picked by children.

Two hazelnut farmers in Turkey confirmed on video that they have to hire children because otherwise adult workers would not come to work on their farms. These same farmers say their hazelnuts end up with Ferrero with one adding, “99 percent of the hazelnuts in the area are bought by Ferrero” and "as far as I can see everybody has child labour.” We were able to trace the hazelnuts from one of the farms that hires children to the merchant that buys them.

In the meantime, Ferrero won’t name a single farm its suppliers buy from, although it claims that 100 percent of its hazelnuts will be traceable by 2020. [5] But they admitted that as of 2018, they had achieved only 39 percent traceability. [6]

Ferrero claims that it does not tolerate child labour nor any form of slavery as stated in its Code of Business Conduct. They say: “We are determined to prevent and eliminate child labour all along our supply chain, with the conviction that every child should be protected, by all possible means, from any form of exploitation.“ Additionally, they have a project that aims at protecting children against the worst forms of labour, exploitation and violence. [7]

But child labour is still widespread in Turkey, today. Farmers and merchants say that Ferrero’s initiatives against child labour are ineffective because they do not involve or reach all the children who are exploited in the fields, every year.

The root of the problem is the price Ferrero pays for hazelnuts. Farmers as well as a middleman who finds seasonal workers to work on the farms, said that if Ferrero pays more for hazelnuts, they would not be forced to hire children. It’s now time for Ferrero to live up to its commitments. Farmers interviewed think that Ferrero could put an end to all forms of child labour in Turkey’s supply chain if they really want, as long as they pay a fair price for hazelnuts.

Tell Ferrero to support a fair price for hazelnuts in Turkey so that adult workers get a living wage income and to end child labour! In 2020, we’re planning a big action where we will deliver your signatures to Ferrero to ensure that Kinder products are not made by children.

Return to petition
By clicking “Sign” you are supporting this campaign, and agreeing to WeMove.EU using your information for the purpose of this campaign. We might hand over your name, surname and country to the petition target. Unless you subscribe to receive personalised updates, we will delete your data after the campaign has ended. We will never share your data with any third parties without your permission. See our full privacy policy here.
99,915
of 125,000 signatures

Stop child labour,promote decent work
Henrietta
Stop the child abuse
Jessica
Parce que nous sommes au 21eme siècle et il est anormal que nous ayons encore ce type de problèmes.
Lisa
Every child around the world deserves to live their childhood regardless of social class or culture. It is about time that multinational organisations take responsibility and develop new strategies along their supply chain which ensures and promotes the banning of child labour.
Rauda
Everybody loves chocolate, it is potentially a great product. To celebrate this positivity, chocolate production should bring what's good to those who work in its industry. Quality of life. So it should not be associated with suppression, forced labour, child labour etc. The same goes for hazelnut industry, or any food industry. And child labour must stop anyway. Children need to go to school and be a child.
Henk-Jan
Thanks for signing! Your signature has been added.

For Valentine's Day, we want justice for children not chocolate made by children!

After close to 90,000 people signed our petition and our investigation received media coverage all over the world including from The Guardian, L'Express and Corriere della Sera, one of our targets, Ferrero’s Hazelnut Company Officer, has agreed to meet with us in early March.

We had asked Ferrero to meet with us in Turkey along with farmers and labourers. But for now they've refused and said they first want to meet 1-2-1 with us in Rome.

At this meeting with the , we need your help to ensure that Ferrero takes us and our demands seriously. On Valentine's Day when many people will be buying chocolates, let's show Ferrero that together thousands of us we will not be ignored.

It's easy. If all of us send them the image with our demands on Ferrero Rocher's Facebook Wall, they will be forced to listen and respond to us when we meet face-to-face.

All you have to do is:

1. Copy the url or image below 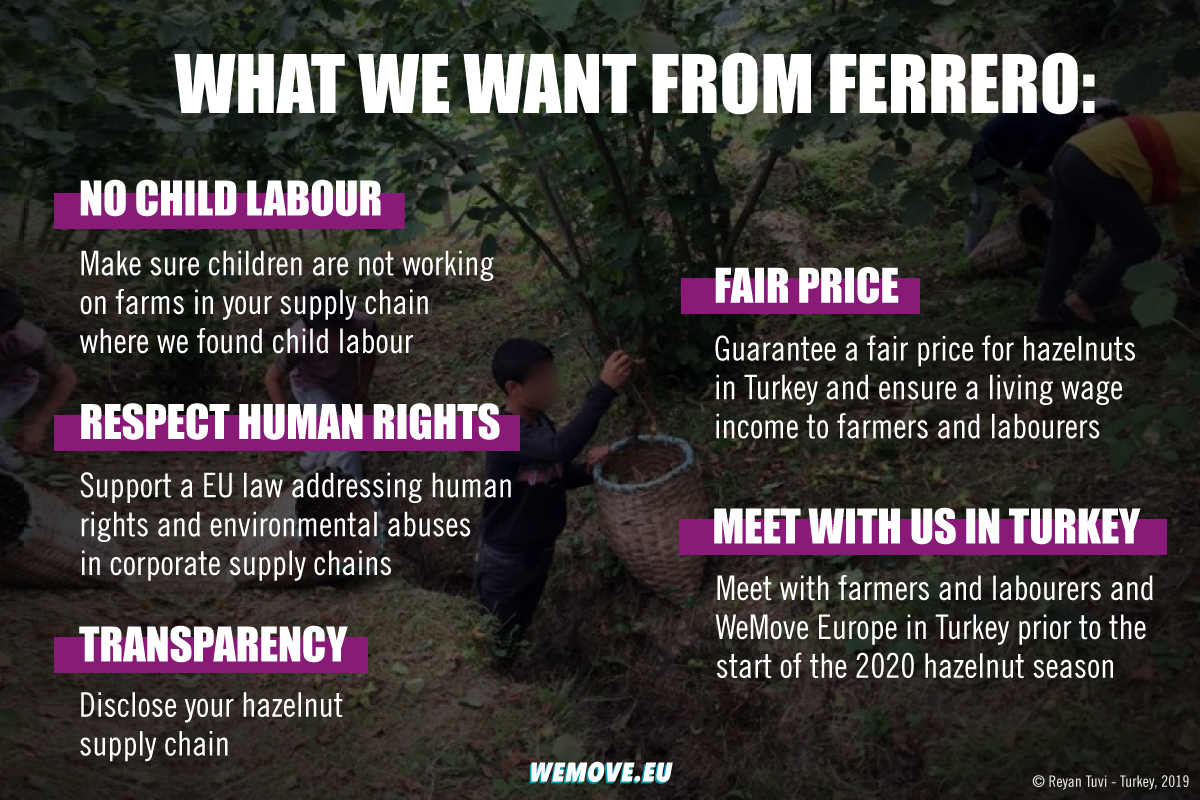 4. Optional: Add any additional message you want as simple as "For Ferrero" or "From WeMove" or any other message you wish to say

Subject line
Hi, Did you know that Nutella, Kinder Bueno and Ferrero-Rocher contain hazelnuts that may be picked by children? I just signed a petition to stop child labour immediately! Will you join me? https://act.wemove.eu/campaigns/ferrero-child-labour-uk 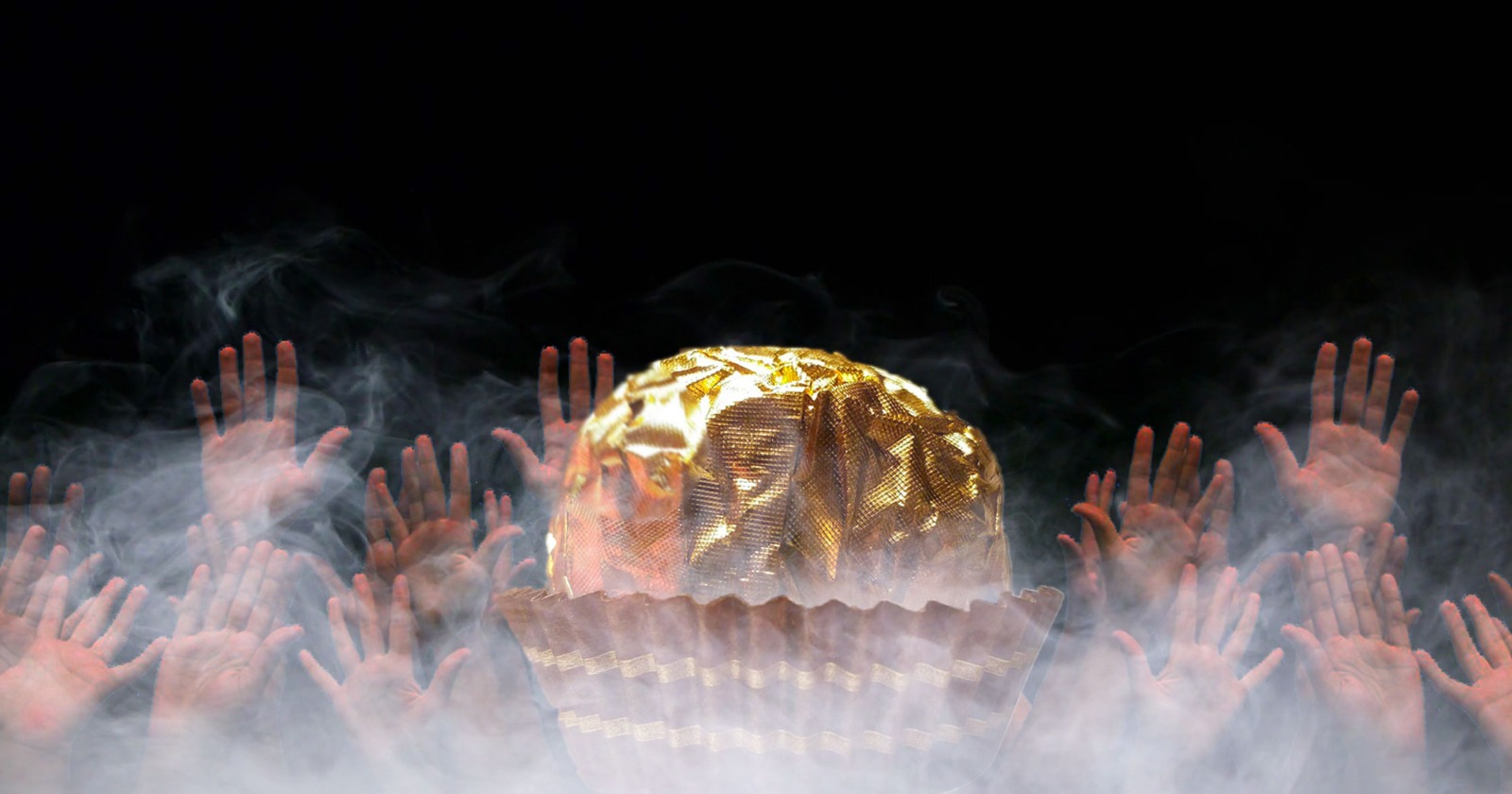 Can you donate just a few pounds a month to help our community continue working to ensure adult workers get a living wage and we stop child labour?

Thank you for standing with us in the fight to provide a living wage and protect children all over the world. It is only together that we can truly be a force to be reckoned with.