For the first time in history we could have a way to internationally clamp down on corporate abuses. A new global treaty would introduce legally binding rules for corporations. But EU countries have been boycotting it. However, thanks to thousands of actions, more than 93,000, the European Union agreed to participate in international meeting where the treaty was discussed in November - and according to our reports, it seems in good faith! This is a great success, but we will continue to monitor the behaviour of EU countries and will up the pressure next year when hard negotiations start. If you'd like to take action for a more corporate just Europe, visit www.wemove.eu.
40,651 of 50,000 signatures

To the president of the European Commission, Jean-Claude Juncker, and EU Foreign Affairs ministers

The absence of the European Union and its Member States at the negotiations on a United Nations treaty on transnational corporations and human rights is a scandal. This treaty, if adopted, could provide a historic opportunity to hold corporations to account.

The EU should stop undermining this process, start taking part in discussions, and participate in good faith in the discussions on the nature, content and scope of the treaty taking place in Geneva in October 2016.

In the next few days, a discussion about one of the main causes of the greatest injustices of our time, corporate abuse [1], is taking place. And despite having been warmly invited to take part, EU countries have chosen to ignore it.

For the first time in history we could have a way to internationally clamp down on corporate abuses. A new global treaty would introduce legally binding rules for corporations. But despite having support from most countries in the United Nations, every EU country is boycotting this treaty [2]. Granted, this is but a first step. But it is one that thousands of people have longed for for decades, and which can help us start change.

Let’s send a strong message to our leaders. The European Parliament already issued a resolution urging EU countries to engage in this global discussion [3], and right now a global coalition of movements, backed by thousands of people in Europe, are working together to up the pressure.

Return to petition
Your personal information will be kept private and held securely. By submitting information you are agreeing to WeMove Europe keeping you informed about campaigns and agree to the use of cookies in accordance with our privacy policy
40,651
of 50,000 signatures
Thanks for signing! Your signature has been added.

>
Stop corporate abuse
>
Hi, We’ve endured corporate abuse for too long. Now there is a historical opportunity to fight it back as a huge coalition of social movements are rallying together to make sure a new global treaty is enforced. But we need EU leaders on board, and so far they have chosen to ignore this opportunity. I've just signed this petition to tell them I want them to take corporate abuse seriously. Will you SIGN NOW? https://act.wemove.eu/campaigns/stop-corporate-abuse Thanks 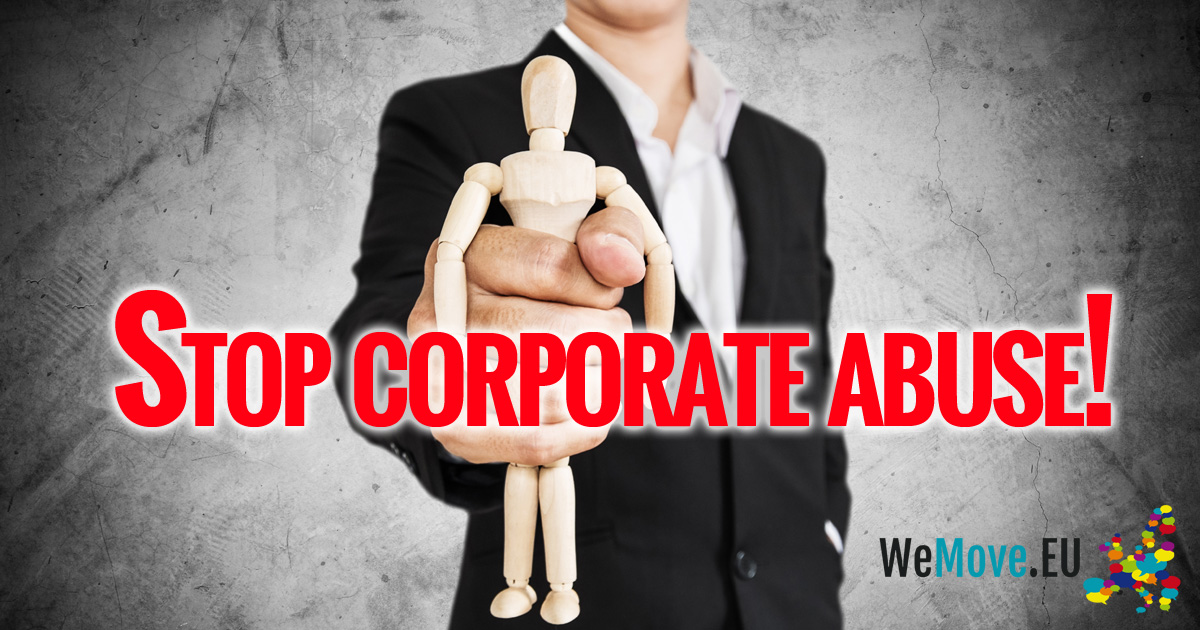 The Tories launched a series of unprecedented attacks on EU nationals in Britain. The nasty party is back and it’s time for us to stop them.