We call on you to tackle the life-threatening climate crisis. We do not want public money spent on fossil gas projects! We ask you to exclude fossil fuel projects from all EU investments.

This includes projects supporting fossil gas through the back-door, i.e. fossil-based hydrogen and “decarbonized” or “low carbon” gas which is made from fossil gas.

We demand that EU money is instead invested in renewable energy, so we can build a resilient, green and just energy system for everyone.

We know that if we want a shot at saving our planet, we need to leave fossil fuels behind. And right now we have a golden opportunity to do just that.

The European Commission has just said fossil gas should not be receiving billions in European funding. [1] But for this to happen, we need three key Members of the European Parliament to agree. But The problem is, the gas industry has just played all the tricks in the book to impact their decision. [2]  And time is running out.

We only have until Monday before they will fix their position on funding fossil gas projects – or not.

The decision will shape our energy supply for decades to come. Our partners are setting up emergency meetings in Parliament to make the case for ending fossil gas funding. But their case would be so much stronger if they were backed by hundreds of thousands of people from across the continent.

Only by coming together can we outbalance the gas industry that has been lobbying our EU leaders. Will you join us?

Return to petition
By clicking “Sign” you are supporting this campaign, and agreeing to WeMove Europe using your information for the purpose of this campaign. We might hand over your name, surname and country to the petition target. Unless you subscribe to receive personalised updates, we will delete your data after the campaign has ended. We will never share your data with any third parties without your permission. See our full privacy policy here.
69,940
of 100,000 signatures

Gas is a fossil fuel, there is nothing sustainable about it. The leakeage of fossil fuel natural gas emits methane, a green house gas many times stronger thann CO2. Stop this madness!
Gonçalo
As we are aiming at moving away from fossil fuels, funding fossil gas projects will send a wrong signal, and prolong the jurney towards a better future. Instead put tax on fossil fuels and let the income from this pay part of the translation. Nobody really knows, but I am pretty confident that human population is paying way too little for the natural resources we actually consumes. I will not continue on the long term. The later we get started on the transformation, the more expensive the journey will be. Don't skip the bill to our children/grandchildren. Thanks and regards Kaj Kristensen
Kaj
So far too many countries think it acceptable to keep digging into the planet's earth without a care in the world for fossil fuels. The planet is fighting back and we are seeing it first hand by the climate change that is coming to a catastrophic ending. Everyone who lives on this planet will be affected at some time or other. Problem is governments cave into the demands of well heeled and powerful countries and keep on digging regardless of what they are doing. This must stop. Don't give in and keep paying companies to destroy the only home we have. Governments have the power to stop the crisis that is now upon us.
C.
De aarde kan goed zonder men. sen.de mens niet zonder de aarde.we moeten er zuinig op zijn.nu gaat het FOUT.
Anneke
Invest in further development of precision in the handling of renewable organic material found in waste and sewage, which with unsustainable and very costly methods creates pollutants that are costly losses. Why are there still a lack of high-tech local biogas plants and collection systems that prevent emissions from food and toilet waste during digitized logistics? Why is it still less than 2% of plant nutrients that go back to cultivated land https://www.ellenmacarthurfoundation.org/assets/downloads/Cities-and-Circular-Economy-for-Food_280119.pdf) and 98% negatively affecting the environment, health and climate?
Ruzena
Thanks for signing! Your signature has been added.

Thanks for sending an email!
Tweet to Tom BERENDSEN and Erik BERGKVIST

Three EU politicians could push the EU to spend billions of euros on fossil gas projects. They will decide by Monday. Now it's time to raise our voices and tell them to protect our planet!

At present, it’s finely balanced, and public pressure could tip their decision the right way. You’ve already signed the petition, but now it’s time to set twitter on fire!

Send a tweet to MEPs to stop billions of euros of our public money flowing into fossil gas!

We are determined to save our planet and stop the fossil fuel industry. The next four months will be key. We will be working hard on this powerful campaign to impact this and the upcoming, crucial decisions in the EU.

To supercharge our fight against the fossil fuel giants - please consider donating to our campaign. We know it can feel hard to make a difference as just one person.The beauty of WeMove Europe is that when we all donate a bit together, we don’t need anything other than each other to do absolutely incredible things.

So how about it? Will you join the thousands of people already donating to WeMove Europe to enable all of us to keep fighting the biggest battles of our time?

Want your donation to be one off? Please make sure "become a sustaining, monthly contributor" is not ticked. 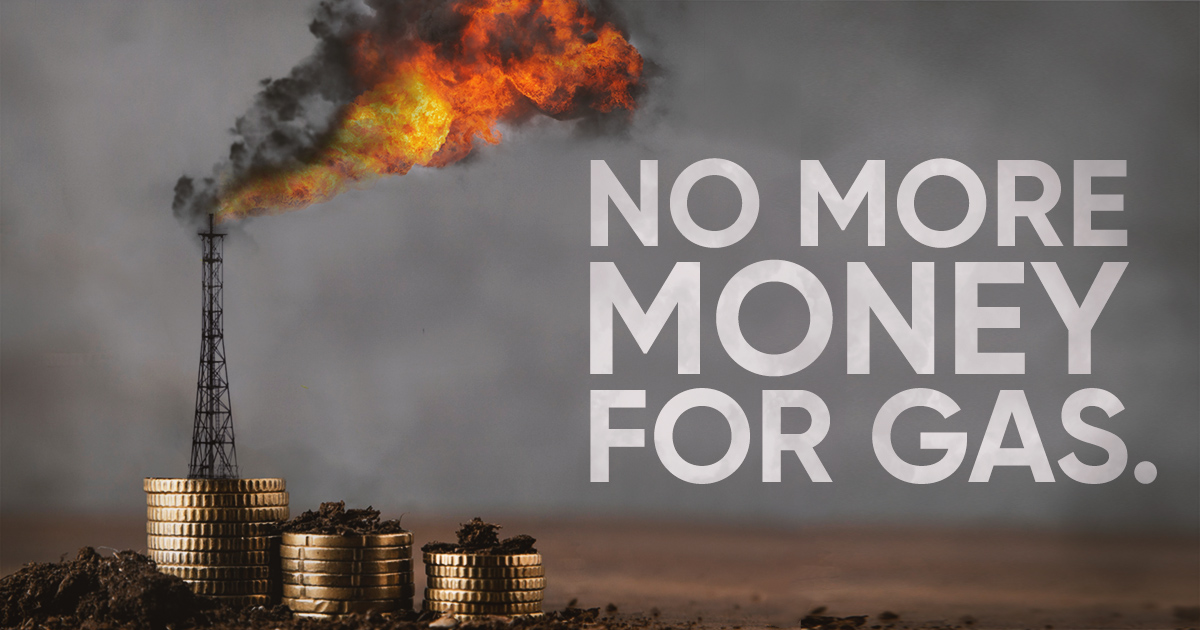 EU leaders are planning to spend billions on fossil gas projects. I just added my voice to stop them. But time is running out. They will decide in the next few weeks. Join me here to stop fossil gas. #NoMoneyForGas

Help cancel fossil gas
Hi, We know that if we want a shot at saving our planet, we need to leave fossil fuels behind. But EU leaders could push the EU to spend billions on NEW fossil gas projects. Leaders will decide in the next few weeks. I have just signed a petition to ask the European parliament to stop funding fossil gas projects. Will you join me? Sign here: https://act.wemove.eu/campaigns/nomoneyforgas

EU leaders are planning to spend billions on fossil gas projects. I just added my voice to stop them. But time is running out. They will decide in the next few weeks. Join me here to stop fossil gas. #NoMoneyForGas

Thank you for standing up for our planet with us. It is only together that we can truly be a force to be reckoned with.