This campaign has now closed! More than 66,000 of us called on the European Commission and the EU energy ministers to drop all plans to support nuclear power in Europe using public European funds. We made sure our demands were heard in Brussels, and our protest was supported by several member states in the Council of the EU. The future of EU's energy is in renewables and energy efficiency, not in dangerous and expensive nuclear technologies.

Would you like to support other campaigns to protect our environment? Check them out at www.wemove.eu

European Commission and Energy ministers of the EU member states

Not a single euro from the European taxpayers’ money should be spent on dangerous and polluting nuclear power! Drop all plans to support the nuclear power industry in their expensive gambles with our tax money - and with our health!

Powerful voices among EU decision-makers are lending their ear to the nuclear industry lobby. They want to take us back to the nuclear age - a time when people across Europe lived in the shadows of ever more deadly reactors producing radioactive waste.

A recently leaked discussion paper from the European Commission [1] makes the industry’s ambitions clear: they want support for dangerous nuclear power, and they want it from EU taxpayers’ money.

Next week the EU energy ministers are meeting. We have to come together now to shout out loudly against nuclear power in Europe, before any decisions are made without us. Let’s tell the Commission and our ministers to drop all plans to support the nuclear power industry in their expensive gambles with our tax money - and with our health!

The leaked document is meant to guide the Commission in deciding the future of the EU energy sector - but the voice of the European public has been noticeably absent from this discussion.

Nuclear power is not only a huge security risk - it’s also extremely expensive. The costs are so high that no private company would back nuclear without the promise of extensive subsidies from the public coffers. Learning from the terrible disasters in Chernobyl and Fukushima [2, 3], many European countries have already pledged to phase-out nuclear power. Instead, they are supporting clean renewable energy technologies, putting the health and safety of people and environment ahead of special interests of the corporate lobby.

If we come together now before anything is set in stone and oppose the idea of backing new nuclear investments with public money, the EU decision-makers can still make the right choice and ditch all future plans to finance nuclear power. But to get there, we need all hands on deck! Europe should be leading the way in clean renewable energy and supporting small-scale, community-owned energy sources, not giving more power to corporations who happily risk our tax money and our health to turn a profit.

Sign this petition to say no to financing nuclear power with our tax money!

[1] Draft declaration of intent from EU

[2] More information on the Chernobyl disaster

[3] More information on the Fukushima disaster

Return to petition
Your personal information will be kept private and held securely. By submitting information you agree to the use of cookies in accordance with our privacy policy.
25,481
of 50,000 signatures

Wolfgang
to stay for peace
David
Nuclear weapons and nuclear power are grave dangers to the future of our planet. There are much better ways of investing money - wind, solar, hydro, tidal.
John
We didn't ask for this, why should we have it forced onto us?
Linda
I want my and all children to live in a nuclear free world.
Carol
Because if they can push you around they certainly can push us Canadians , no problems . Stop this Madness !
Thanks for signing! Your signature has been added.

Do you know anyone who also feels strongly about nuclear power? Why not send them an email asking them to sign the petition!

>
Stop nuclear power
>
Hi, The EU is planning to use taxpayers' money to subsidise new nuclear power investments. Nuclear power is dangerous and expensive! Sign the petition to stop the EU using our money for nuclear! https://act.wemove.eu/nuclear-subsidies

Nuclear? Not with my tax money! 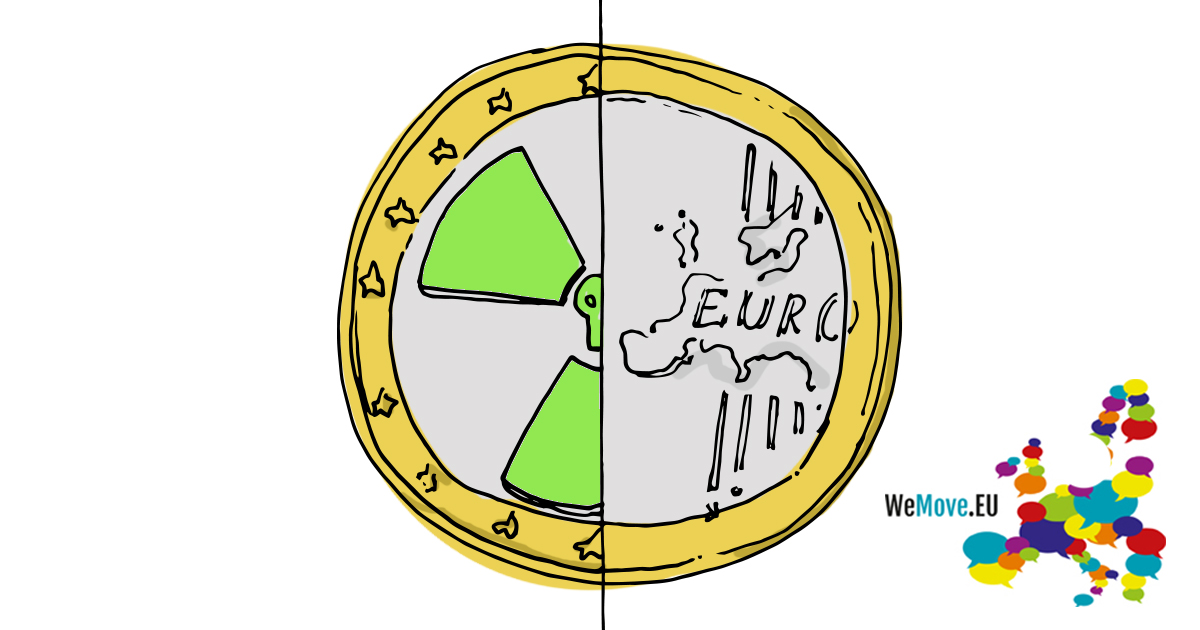 No public EU money for dangerous and expensive nuclear power - not now, not ever! Sign now to stop European taxpayers’ money supporting the nuclear power industry in their expensive gambles with our tax money - and with our health!

Thank you for signing to stop new nuclear power investments in Europe. It is only together that we can truly be a force to be reckoned with.