Thank you for your passion in stopping patents on life. This petition has now ended. Our joint protest with many other organisations against patents on life brought a huge victory: at the end of June the European Patent Organisation decided not to grant a blanket patent on conventionally-bred plants. This is a great step into the right direction. However, our success comes with a new challenge for our movement: New loopholes have been created that will allow the relevant prohibitions to be eroded.

International companies are increasingly putting patents on fruits, vegetables, crops and livestock. They have control over their price and over what can be farmed and consumed. Step by step they are gaining a monopoly on our daily food.

Stop any further systematic abuse of patent law and use your power in the Administrative Council of the European Patent Organisation as well as in the European Union to make sure patents on plants and animals are stopped.

Monsanto not only owns genetically modified plants but they now want to own our regular fruit and vegetables by patenting them. If Monsanto owned a patent on a variety of tomatoes for example, no one would be allowed to plant one without paying them a fee. It’s as if they wanted to claim ownership of the smell of the ocean and then ask us to pay for it.

At the moment, patenting conventionally bred crops and animals is not permitted. However, this has not stopped 120 patents like these from being approved, and there are over 1000 applications for patents pending. [1] But together we can do our best to stop this.

In just two days the body making these decisions, the European Patent Office, will decide on a patent application by Monsanto on a melon variety. As a European citizen’s movement there are two things we can do to stop this: call upon the European Commission and the member states of the European Patent Organisation to end this process.

If you are wondering why the Patent Office is allowing patents on life, well that is because it receives a fee for each patent. It is how it is able to exist. The only way to stop it from continuing to make money off distributing patents on conventional plants and animals is if enough of us put pressure on the European Commission and the member states of the European Patent Organisation.

Nature and life itself cannot be owned by any of us, especially not by corporations.

Together we can make a difference : sign now to stop Monsanto.

Return to petition
Your personal information will be kept private and held securely. By submitting information you agree to the use of cookies in accordance with our privacy policy.
503,387
of 600,000 signatures

Thank you for taking action to stop patents on life.

Do you know anyone who also feels strongly about making sure our nature, our fruit and vegetables, and our animals can remain patent-free? Why not send them an email asking them sign the petition! 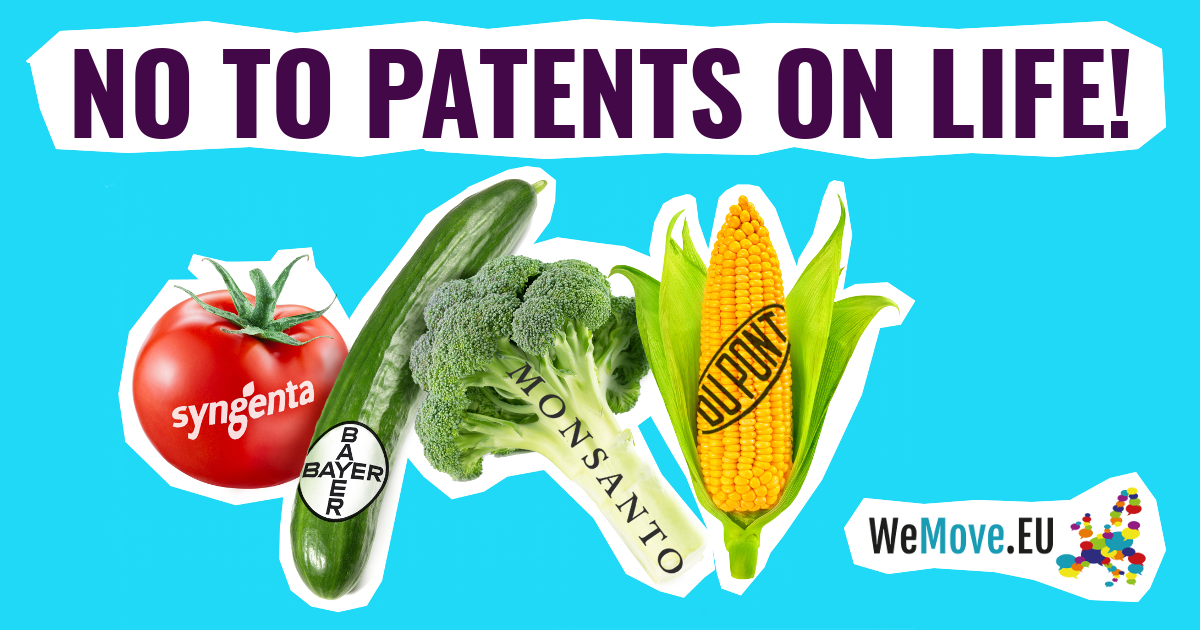 Sign the petition to stop Monsanto from patenting regular fruit and vegetables. If corporations get to patent things that have always existed and no one has ever owned like nature, our fruit and vegetables, common animals this threatens our future in ways we can not yet comprehend. It’s as if they wanted to claim ownership of the smell of the ocean and then ask us to pay for it. Take action now!

Thank you for standing up to Monsanto with us. It is only together that we can truly be a force to be reckoned with.